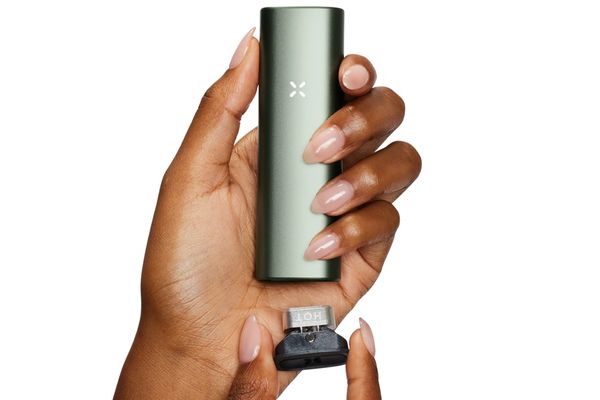 The Pax Plus is the new vaporizer on the market. This is the company’s first big product launch in five years. The Pax 3 and Pax Plus have a similar design and are developed on the same platform; therefore, there have been few updates between them.

The Pax Plus costs $250 and can be used for dry herbs and concentrates. It is sold in a bundle with other accessories.

What you get when you purchase a Pax Plus bundle:

The oven lids, mouthpieces, and charging accessories for the Pax Plus and Pax 3 are interchangeable because of the same design of the two devices’ bodies (and the Pax Mini as well.)

The Pax Plus maintains the same classic and understated look as the original. Seriously, the identical style. It has the sleek simplicity of an “Apple” product. It’s simple to understand why Pax has been nicknamed “the iPhone of vaporizers” several times.

The Pax Plus has the same premium feel as an iPhone or Macbook, thanks to its aluminum unibody design. The four recognizable ‘petal’ shaped LEDs up front and the magnetic charging port reveal its only physical features. The vaporizer has a rounded rectangular form and is about 4 inches in height. It’s perfectly balanced in hand and small enough to stow away in the pocket.

The vape oven is located at the very bottom of the device and has a magnetic lid to cover it. It is constructed out of stainless steel and has a capacity of approximately half a gram or a quarter of a gram if the half oven cover is used.

Pax also comes with a concentrate insert, which means that it may be used with extract as well as dabs. On the other hand, extract often leaves a messy residue and a sticky feeling behind it. Therefore, experts recommend using the Pax for vaping flowers and a different vape pen for extracts.

The mouthpiece is on the other side of the oven, with a similar design with flat and elevated mouthpiece possibilities. The Flat mouthpiece is flush with the top of the vape and has a tiny slot where you’d insert your lips.

The elevated mouthpiece is a bit more pleasant but will lower vapor output. The draw is more constricted with the flat mouthpiece, which limits airflow.

When air travels slowly, the heat builds up in the oven, enabling greater extraction and stronger vapor. That is why it’s encouraged to take calm and steady inhales while using a dry herb vape, or in other words- “sip, don’t rip.” Fast-moving air cools down the oven. A higher mouthpiece is favorable in terms of convenience, but the flat one is better in terms of performance.

The vapor route is manufactured out of stainless steel, which is of medical quality, and it can be found between the oven and the mouthpiece. It is protected from the outside and kept apart from the other components found on the inside, such as the battery and the heating element. This produces a clean air path, which maintains the integrity of the vapor and its taste.

Sensors in the vape go to standby mode (shown by a blue wavy “X”) whenever the device is not being used. Consequently, the vape mod can adjust to your preferred vaping method. It will continue to heat as long as you keep drawing from it.

To protect the battery and the flower, setting it down between puffs allows it to enter standby mode and adjust the temperature. Exiting standby mode and returning to the desired temperature can be accomplished by moving the device or beginning to inhale.

Because the Pax is a conduction vaporizer, it functions most effectively when used in a densely populated oven. It can fit around half a gram into that space if packed appropriately. You may construct a little brick out of the flower by pressing it down with the oven tool. This will enhance the extraction and ensure that heat is transferred effectively.

Use the lid that comes with the half-oven to administer your micro-doses. But regardless of the method you use, the secret to producing high-quality vapor is to pack the material so that it is compact and nothing leaks out, even if you move the device around.

The Pax may be turned on with a single squeeze of the mouthpiece, and its heating process, represented by a wavy Purple X, begins instantly. There are four modes of operation included with the Plus. Press and hold the power button for two seconds, then click once to switch between them.

A second long push, or a shake, will confirm the new temperature setting and begin heating the device to that temperature. In other words, when the “X” goes green, you may start puffing away.

The Pax Plus requires a more complex cleaning method than some other vapes. The mouthpiece, oven, and vapor channel are the three major components that need to be cleaned. Alcohol wipes and pipe cleaners (both of which are included in Pax’s kit) will be used in the procedure. You don’t have to clean it thoroughly after every usage, but you should do it around once every ten to fifteen times you use it.

Devices like the Mighty+, Crafty+, and Arizer Air Max are “maintenance-free” in comparison. The vapor route is the mouthpiece, and with Air Max, it’s also an oven. More specifics can be found in the reviews themselves, although, in general, they need less effort when it comes to upkeep and cleaning.

After using the Pax Plus for a few months, we can confirm that it is more effective at producing vapor and extracting than the Pax 3. In most cases, the first two hits are the best, extremely extensive in scope and taste. Then, like with every other dry herb vaporizer, the taste and vapor quality gradually deteriorate. The vapor starts to feel hot and harsh as the session winds down.

The vapor quality is high, but it can’t compare to what a bigger vape, like the Mighty+, can generate. However, Pax is just a fifth the size of the Mighty and costs around half as much. Compared to other vapes of similar size, the vapor quality produced by the Pax is far and away the greatest.

Twenty to thirty seconds is all it takes to become hot, and a single charge may power anywhere from six to eight uses. This is quite a feat given the Pax’s compact form factor, and the battery life exceeds expectations.

The lack of a heat sink causes Pax to overheat at the session’s conclusion, much as the IQ and Firefly 2. Fins on vaporizers like the Crafty and Mighty direct your fingertips away from the heating chamber and enable air to flow through, keeping the vape cool to the touch. Smaller vapes heat a lot faster.

Several strategies exist to deal with the warming problem:

The vape itself is great; however, the charger is the second major flaw we have with it. The lack of a USB-C charging port on this vaporizer is inexcusable. The magnetic charger is fantastic; however, it must be used in addition to a standard socket.

The magnetic charger uses a standard USB port, not USB-C, for charging. In our opinion, this isn’t in keeping with the brand’s “technology-forward” ethos. When traveling, leaving your Pax’s proprietary charger behind in a hotel room effectively renders the device useless.

Pax Plus vs. Pax 3 vs Pax Mini

Now, as we were saying before, almost everything is the same. I’ve made a few observations on the recent changes:

Pax modified the bottom screen to be a 3D screen, which only indicates that the corners are elevated to make it simpler to remove. We have observed a somewhat better extraction, which leads me to assume that some modifications have been made to the heating element. Pax does not give any information regarding what happened inside the machine.

In addition to the Pax Plus, Pax also introduced a more compact and streamlined model of the original Pax. The following is an explanation of the similarities and differences between the two versions:

Although not much has changed since the Pax 3, the Pax Plus still provides the finest performance-to-size ratio of any portable dry herb vaporizer.

Pax could be better at something in particular, but it does a lot of things extremely well. It’s not the most efficient or flavorful vape, but it’s the best and most premium small-form vape on the market. It reliably accomplishes its intended purpose and lasts for quite some time.